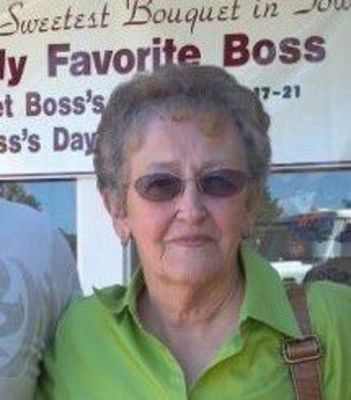 Gernadean was born on February 6, 1932 in Fruitvale, to Albert and Ruthie Hawkins. She was the youngest of 5 children which included brothers Bill and Mois and sisters Lois and Olean. On March 4, 1950 she married Alfred Paul Bell, also of Grand Saline and they had one daughter, Donna Lynn.
Gernadean lived her whole life in Grand Saline other than a small time spent in Kentucky while Paul was stationed at Ft. Knox during the Korean War. During this time Donna Lynn was born and completed their small family. Upon moving back to Grand Saline, they built a home on West Hwy 80 where they lived until 2015 when she and Donna moved to Tyler. She was an active member of Silver Lake Baptist Church until her move to Tyler.

Gernadean loved the outdoors, friends, family and enjoying life. She enjoyed keeping her lawn, watching hummingbirds, visiting with her friends and neighbors and simply being around the people she loved. She was a feisty lady and even though she was short in stature, she was not short on the love she had for those closest to her. She had a quick wit, a compassionate spirit and loving heart! She was also blunt, to the point and opinionated but that's what we loved about her. If you didn't want to know the truth you should not ask a question, because you would get the truth, the whole truth and nothing but the truth.

She went by many names to different people. To her husband and close friends she was Dean. To many nieces and nephews she was known as Aunt Bug. To her grandson, Joseph, she was simply Nanny. And to his friends, many of whom she considered her own children, she was Gernie. No matter what you called her, if you knew her, she would do anything for you.
She spent a majority of her middle years acting as a taxi for Joseph and his friends. Whisking them from school to ball fields and to friends houses and back again. Everyone knew Gernie and she loved everyone as if they belonged to her.
Gernadean was preceded in death by her husband, Paul, in Nov 2000 and by her parents and siblings. She is survived by her daughter Donna Lynn Jacks, grandson and daughter-in-law, Joseph and Erika Jacks and many beloved cousins, nieces, nephews and friends.
As she requested, there will only be a private graveside service.

If you wish to make donations in memory of Gernadean, they may be made to Woodside Cemetery Association, P.O. Box 543, Grand Saline, TX 75140.