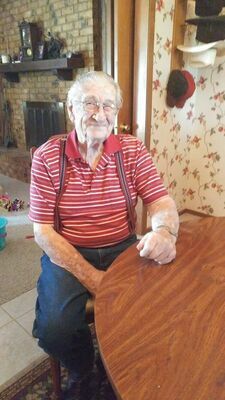 Jesus called Bill to his side on December 27, 2020 in Grand Saline. Bill lived all his life in Grand Saline and was a member of Main Street Baptist Church.

Bill Crocker was a man of few words, he was a man of faith and a man of action. He was a man’s man, he loved to tinker, garden, and pick up sticks and he always had a good story to tell over a cup of coffee, if you’d listen. He was a family man, he loved his family fiercely.
Bill was born to Birdie and Irwin Crocker in Grand Saline, on April 4, 1929. He was one of four sons, L.M., J.D., and Garland Crocker, who also grew up in Grand Saline near Lawrence Springs. When Bill was 17, he went to Shreveport, LA, to enlist in the army, as there were no age requirements in LA at that time unlike Texas. He served two tours in the U.S. Army, one during the Korean War, in the artillery and infantry, followed by 8 years in the Army Reserves. He left the Army as a Sergeant.

Bill married Genelle Humphry of Van, on November 25, 1950. They were married 62 years before she passed in 2013, and had two sons together, Tim and Danny Crocker. Bill and Nell were always on some adventure traveling somewhere, whether it was to the Hill Country, or Arkansas, to see the fall foliage, or even further abroad. Of all their adventures, Bill looked most fondly upon their time living in Alaska while he was in the service. Following his time in the service he worked a few different places before he started his 37 years career at Morton Salt where he retired as a machine operator, in 1993.
Papa understood what was most meaningful in life, he never hesitated or grumbled to pour time into his family and dearest friends, in fact, that was when he was his most joyful. Bill loved playing in his weekly domino game with the guys and rarely missed a Sunday at Main Street Baptist Church. You could always count on Bill, he might not have been one to talk about his feelings much, but he never really needed to, somehow you could just feel the great big love in his heart, maybe because of that twinkle in his eye and the warmth of that mischievous smile. Bill was happiest when he was spending time with his family, whether it was celebrating a birthday, camping in the RV, playing with his grandkids, or his afternoon coffee with Tim. Papa was a great man, he always gave great hugs and brought such joy to us. His sense of humor was one of his most endearing qualities and just one of the things, of many, that will be greatly missed about him.

Papa’s legacy is his family, his faith, and the living example that he was to each of these. He taught us that the most valuable gift is the gift of time spent with those you love and he lived out Hebrews 11:1 (Now faith is confidence in what we hope for and assurance about what we do not see.)
Bill truly, genuinely, and proudly placed the love, well-being, and happiness of his family before anything else on this earth.
He is preceded in death by his parents; wife of 62 years, Genelle Humphrey Crocker; and two brothers, L.M. Crocker and J.D. Crocker.

And without faith it is impossible to please God, because anyone who comes to him must believe that he exists and that he rewards those who earnestly seek him. Hebrews 11:6

“My sheep listen to my voice; I know them, and they follow me. I give them eternal life, and they shall never perish, no one will snatch them out of my hand.” John 10:27-28

The Winds of Judgement Part 2